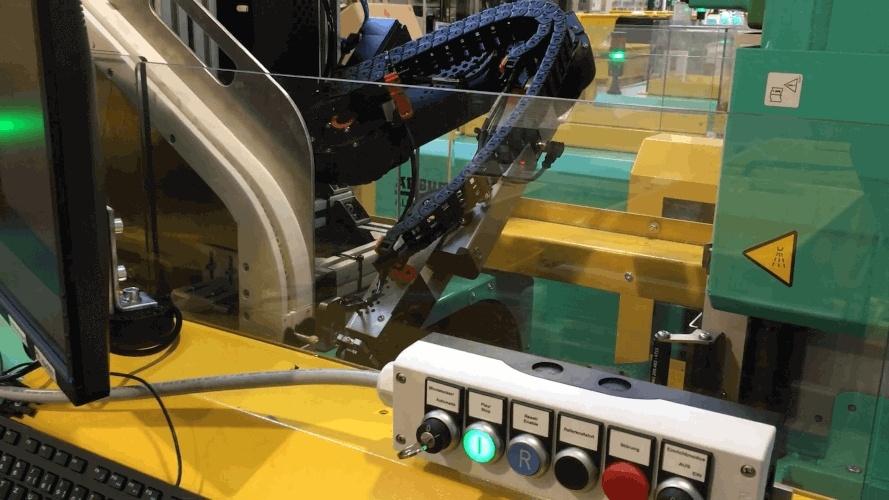 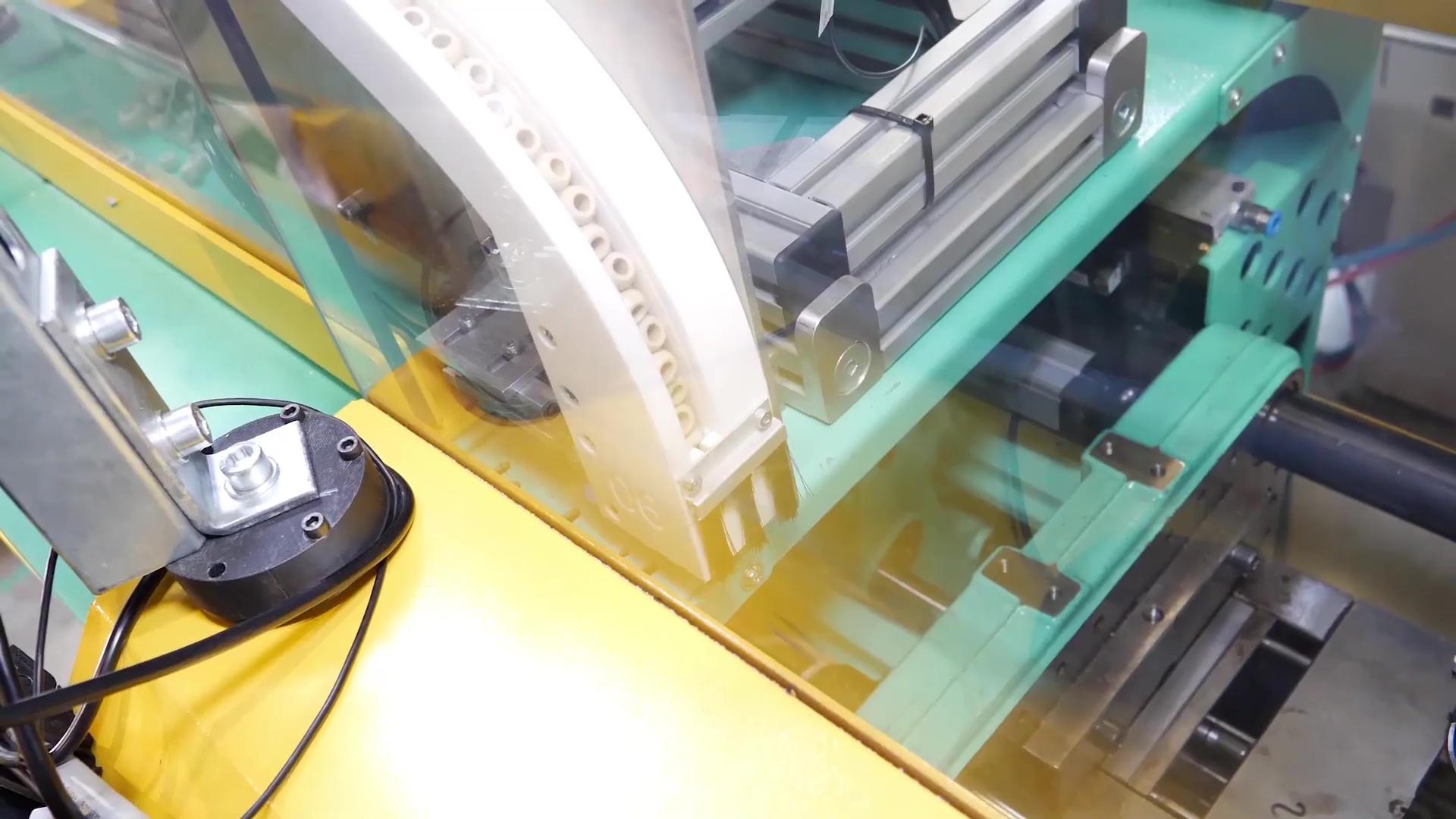 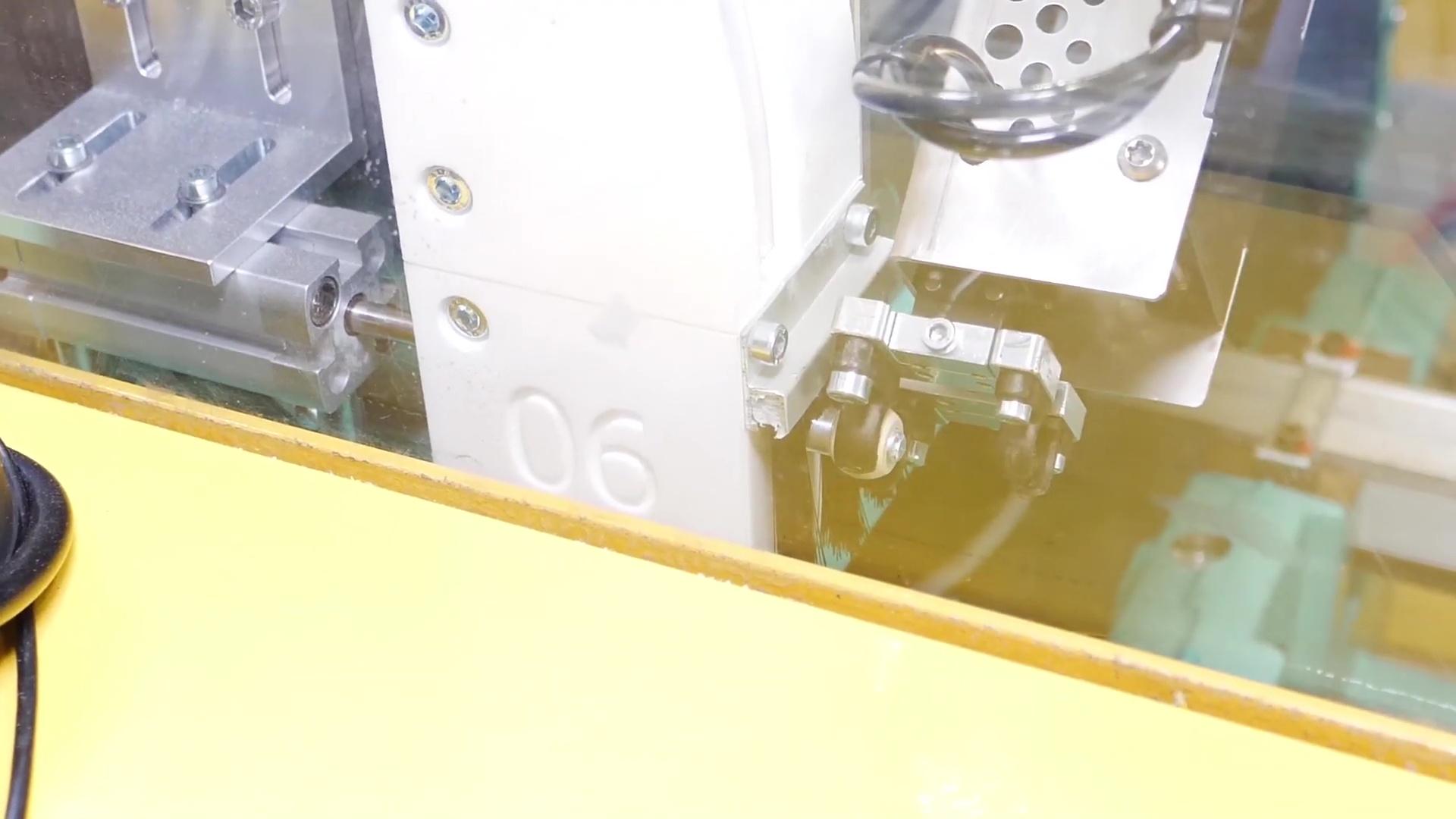 Spherical balls are inserted automatically into an injection-moulding machine.

Medium-sized industrial companies are confronted with high automation pressure. Robotics does not have to be expensive. A pick-and-place robot that paid for itself in record time shows how to get started cost-effectively and at low risk.

Automation with low-cost robotics helps industrial companies increase productivity and achieve consistent product quality. This is demonstrated by an injection molding system for bearing caps at the Cologne-based company igus. Whereas employees used to have to insert the plastic spherical caps into the machine by hand, this task is now performed by robolink - a robotic arm with four degrees of freedom and a reach of 510 millimeters. The arm picks up the calottes with a gripper and places them in the machine, with a repeatability of 0.5 millimeters and at a speed of 0.25 m/s. After overmolding with fiberglass-reinforced plastic and automatic ejection of the component, the process starts again. 250,000 times per year and in three-shift operation.

"With manual monotonous work in industry, there is a risk of employees becoming tired and product quality suffering due to operating errors. With the help of the introduction of low-cost robotics, we have succeeded in relieving employees and further increasing product quality," says Norman Franke, Head of Automation Injection Molding at igus. "In addition, the productivity of the injection molding machine has increased because the system continues to run even when employees are on break."

The advance of robots does not have to be expensive. Quite the opposite. In this case, it is so inexpensive that even small and medium-sized enterprises (SMEs) can experiment with automation and jump on the Industry 4.0 bandwagon. For example, a robolink costs from 2,766 euros - hardly more than a powerful home computer and many times less than comparable robot arms, which cost tens of thousands of euros. The reason for the price is that many components of the robotic arm, such as the gearbox, are not made of metal but of triboplastics. The controller from Commonplace Robotics costs 1,897 euros, and a parallel gripper from Schunk costs around 100 euros. "The bottom line is that investing in such a low-cost robotic solution is low-risk," Franke says. "We achieved the return on investment in about four months."

For industrial companies, the pressure to automate is becoming stronger

According to the online portal Statista, manufacturers sold 381,000 industrial robots worldwide in 2017 - for handling, assembling and processing workpieces. By 2021, this figure is expected to reach 630,000. The benefits of advancing automation are enormous: With their help, industry could generate additional value added of 1.25 trillion euros in 2025, predicts the Federation of German Industries (BDI). Not only because companies will become more productive, but also more flexible and individual. The key words are Industry 4.0 and batch size one.

The problem is that while sectors such as the automotive and aerospace industries are increasingly benefiting from automation and networking, many SMEs are reluctant to do so. Not only for cost reasons. It's also because of the complex interplay of components from different manufacturers - including mechatronics, control systems and software. In addition, acceptance among employees is often low because they fear job losses.

Removing these obstacles is one of the goals of RBTX - a marketplace for low-cost robotics that unites manufacturers of robotics components in a construction kit. The electro-mechanical basic framework is formed by robots from igus, among others - including jointed-arm robots, delta robots and Cartesian robots. This basis can be expanded with individual components from various manufacturers, such as grippers, cameras, interactive software, power electronics, motors, sensors and controllers. Customers can put together a robot solution with just a few clicks. Compatibility is guaranteed, explains Franke: "Companies enjoy investment security because we have assembled all the components in various combinations and tested them in detail."

The low-cost robotic solution used in the injection molding machine from igus enjoys acceptance among employees. Because it was clear from the start: The transformation optimizes the production process, but does not lead to job losses. Because employees who previously had to struggle with monotonous tasks took part in a training course. They learned how to operate the robotic arm and even teach it new movement sequences. A three-day training course was all it took. "The control system from Commonplace Robotics was originally educational software and is child's play to operate - without any programming knowledge," Franke emphasizes. "The employees are enthusiastic about the technology because it not only simplifies the work, but also makes it fun."

The automation of the injection molding system was not only cost-effective to purchase, but is also cost-effective to operate. This is because the robolink robot arm is made of tribopolymers, which enable dry running without lubricants. Accordingly, there are no costs for materials and maintenance. And repairs are also comparatively simple. To help technicians help themselves, repair instructions are documented on the Internet. In addition, RBTX offers spare parts supply within 24 hours. Franke: "It has actually never been easier to get into automation." 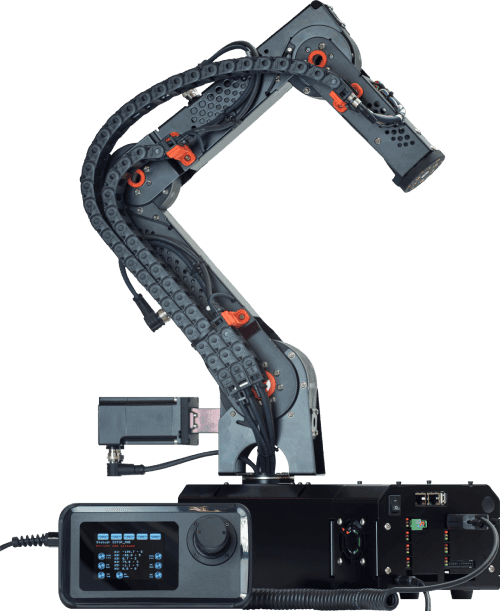 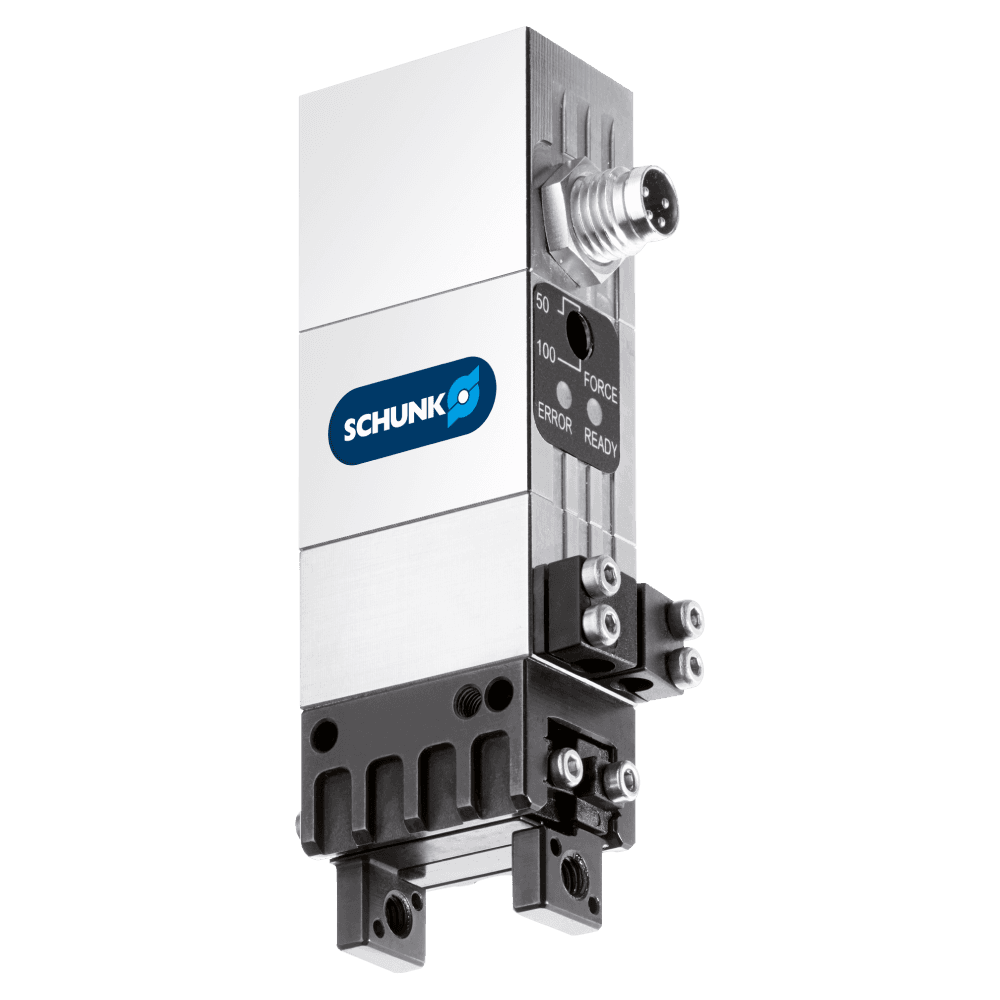 EGP 25-N-N-B Parallel Gripper - Electricschunk$934.64
If you need a custom configuration, you can talk to one of our experts. 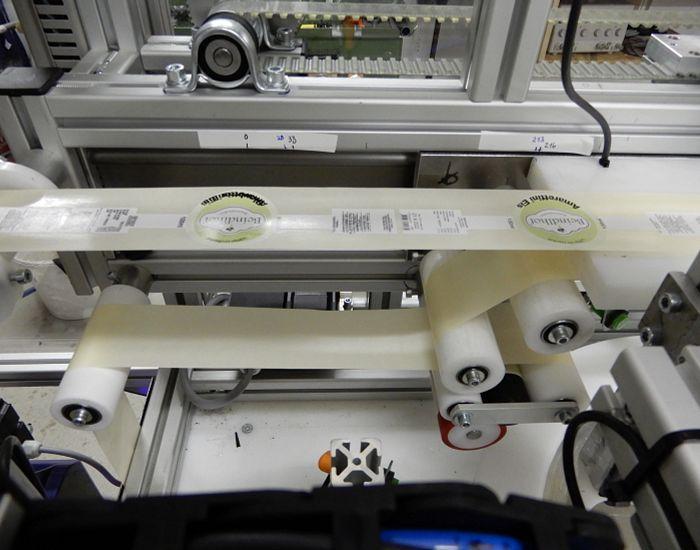 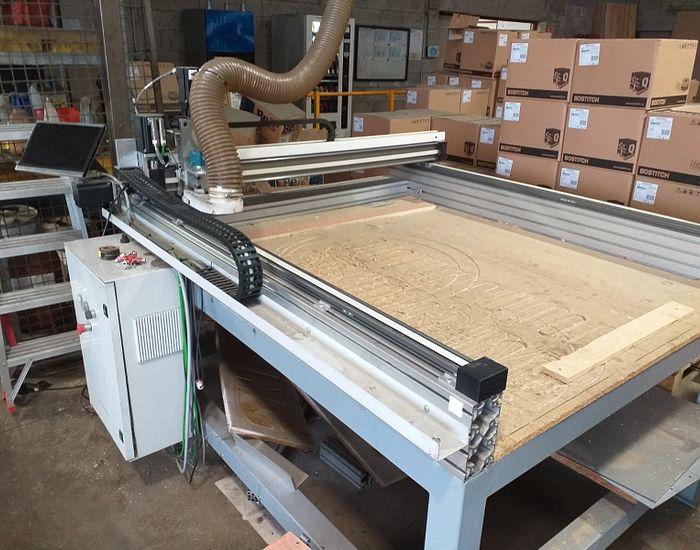 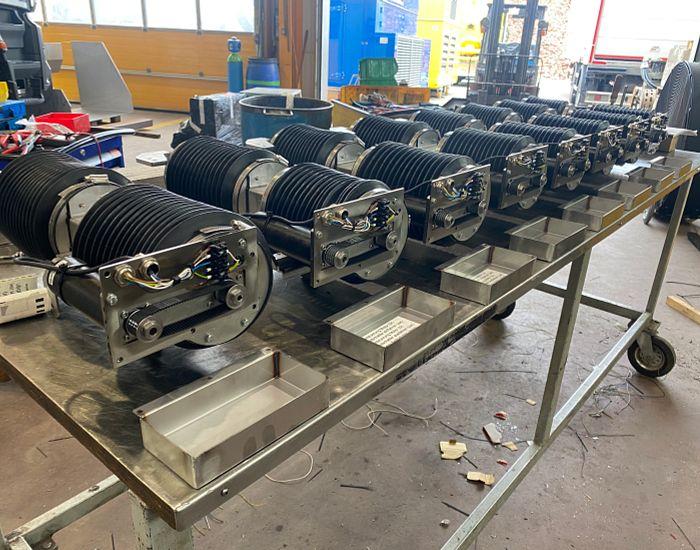 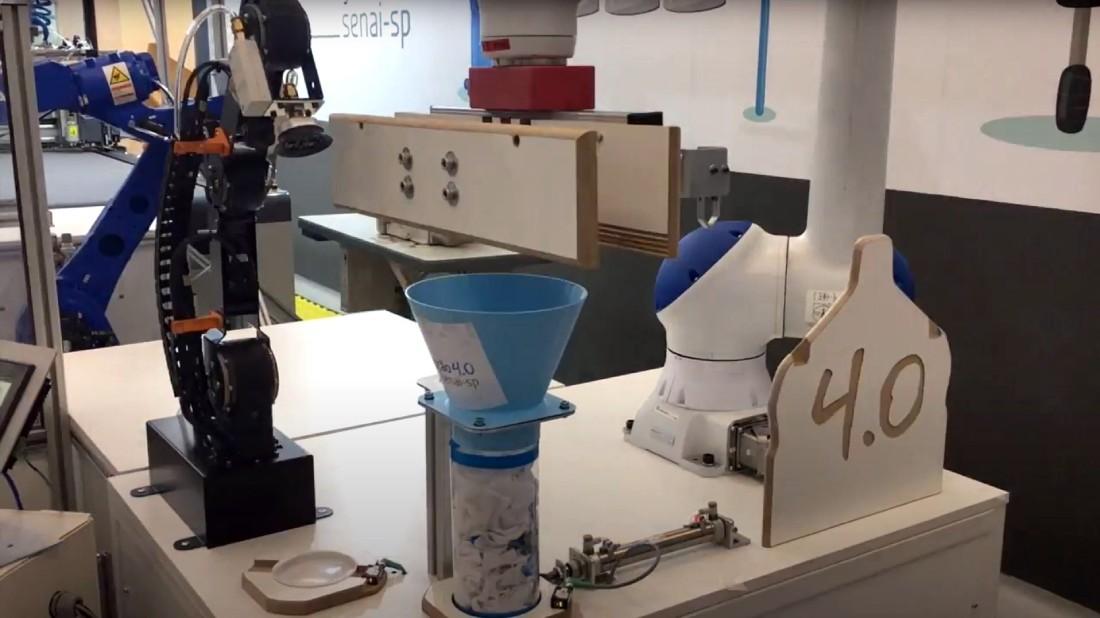